With VE Day and VJ Day, we bring to an end the long run of commemorations of 75th anniversaries of the Second World War. At the same time, we commence on a process of remembering all over again—there are plenty of significant events that were taking place 80 years ago that we should not be forgetting, especially the Dunkirk evacuation and the Battle of Britain.

Whilst the stories of those events in the spring and summer of 1940, thanks to books, television and film, continue to be to the fore in the public consciousness, there are two episodes during this critical period of Britain’s history that are almost unknown today, and in which Wykehamists featured prominently.

With the arrival of German panzer forces on the Channel coast at Abbeville on 20 May, the British Expeditionary Force (BEF), in danger of being encircled, had to look to its lines of communication for possible evacuation routes. Calais, the closest of the Channel ports, and was an obvious candidate and the garrison there was reinforced on 22 May by 30 Infantry Brigade, commanded by Brigadier Claude Nicholson (G, 1912-5). After the surprise of the Anglo-French counter-attack near Arras the previous day, the German spearheads had halted briefly, and this allowed the arriving members of the BEF to establish themselves in the town. However, by the end of the following day, it was clear that any prospect of a counter-attack had vanished and that the town was now under siege. Nicholson and the remains of his force, having earlier received orders to evacuate, were now ordered to hold out for as long as possible—the aim being to hold up the German advance along the coast and allow time for the defensive perimeter to be established around Dunkirk.

On the afternoon of 26 May, driven into the ancient citadel, with little food, water or ammunition, Nicholson and his men were forced to surrender. 3 - 4,000 British troops accompanied Nicholson into captivity, where the Brigadier died on 26 June 1943. Whether the stubborn defence of Calais ultimately bought time for the establishment of the crucial Dunkirk perimeter has been debated ever since: the conclusion of the 2017 film Darkest Hour (in which Nicholson’s desperate plight was briefly depicted) was that it did.

However, neither that recent film (which should receive credit for even mentioning the action) nor Christopher Nolan’s Dunkirk (2017), gave a lot of screen time to the large numbers of French who fought alongside their British allies throughout the late spring and early summer of 1940. Perhaps that does not fit well with the “Standing Alone” mythology that has grown out of the events of 1940 and 1941. But even after Dunkirk, the allies stood together.

51st Highland Division was one BEF unit that had not been sent in to Belgium when the Germans attacked on 10 May, but had been seconded to the Saar front to fight alongside French IX Corps. With the German thrust to the sea at Abbeville and the creation of the Dunkirk pocket, the Highlanders, commanded by Major-General Victor Fortune (G, 1897-1901) were separated from the main body of British and were forced to make a fighting retreat south and west with their French comrades. Cut off before they could reach Le Havre, from where evacuation had been planned, on 10 June 1940, Fortune’s men found themselves surrounded at the small port town of St Valery en Caux. Lacking the broad sandy beaches of Dunkirk and overlooked by cliffs occupied by enemy forces, as well as hampered by thick fog, the Royal Navy’s attempt to evacuate the division came to nothing. Having held out for forty-eight hours, Fortune took the difficult decision to surrender and joined over 10,000 of his men in captivity, although some did not take imprisonment lying down: nearly half of the British POWs who escaped and managed to get back to Britain were from 51st Division. Fortune, the most senior-ranking British captive of the war, despite suffering ill-health and being offered repatriation, chose to stay with his men and work to improve conditions for them. He was knighted after the war for his efforts on behalf of their welfare, which included the laying out of a cricket field at Oflag IX and sourcing curling stones from the Royal Caledonian Curling Club, which were sent via the Red Cross. 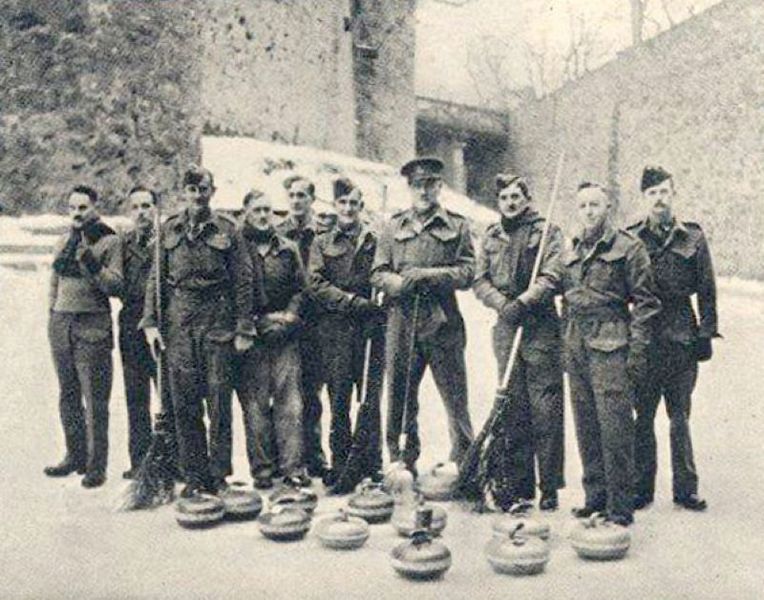 General Fortune Leading his men in a game of curling

In all, ten Wykehamists fought at Calais, of whom four were killed in action, with Nicholson and 2nd Lt. Mike Sinclair (I, 1931-6) dying as POWs. (Sinclair meeting his end attempting to escape—his seventh try—from the notorious Colditz prison camp). Six other OWs were at St Valery with Fortune, of whom three were killed in action.

For the tale of the Oflag IX curling club and for the photograph of General Fortune in the frozen moat of Schloss Spangenberg, I am very grateful for the information from The Curling History Blog.

Read more stories on the Winchester College at War website