Professor Paul Elkington was on shift on 15 March, 2020, when the first COVID-19 patient was diagnosed at University Hospital, Southampton. He recalls: ‘I was asked to go and see the patient, and not only was there no personal protective equipment (PPE), but the patient had popped up in the wrong ward, in completely the wrong part of the hospital and had been there several days. So, lots of people who’d been in contact had to be sent home.’

It was a seminal moment. An Old Wykehamist, Professor Elkington has spent much of his life researching and treating patients with tuberculosis (TB), some of that time in Africa. He is also an academic clinician, well known on the wards at Southampton:

‘I had worked a lot with airborne pathogens and safety controls and filtration systems, and my Africa experience meant I knew exactly what it was like when you had no PPE and the State did not provide.’ 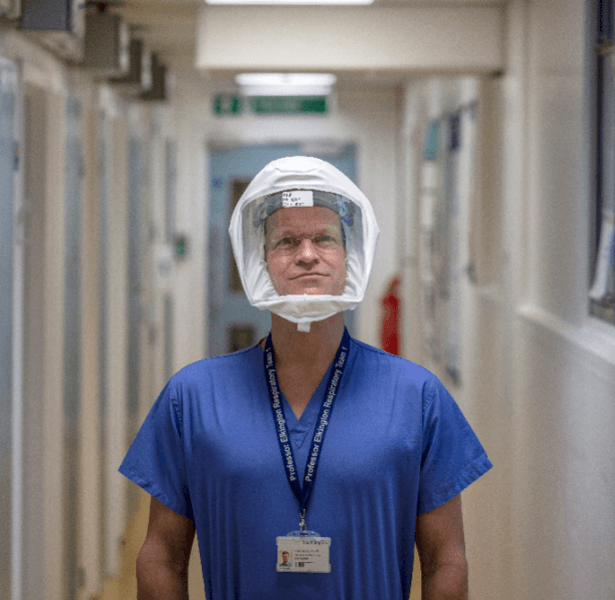 He was also very aware of television reports which showed parts of Northern Italy overwhelmed by COVID-19: ‘There was a very febrile atmosphere in the NHS, because we’d seen doctors and nurses dying in Italy because they’d run out of PPE and kept on seeing patients, and we knew what was going on in Italy was coming here.’ Professor Elkington believed that the blue, disposable face covering he’d been issued with that day, the sort widely used by the public, was inadequate: ‘40 per cent of the air circulates in and out,’ he explained. ‘My first attitude was: “That doesn’t sound very good”. The Wykehamical education would say, “Are we sure about that?” It would not take anything for granted. You’ve got a problem; let’s look at it in a slightly different way.’

“'My first attitude was: "That doesn't sound very good". The Wykehamical education would say, "Are we sure about that?" It would not take anything for granted. You've got a problem; let's look at it in a slightly different way.'”

The very next day he sketched a prototype for a new respirator hood, similar to one he had used in TB research. He enlisted the help of Hywel Morgan, Professor of Bioelectronics at Southampton, and they put together a team of ‘eight of the best in the University’.

They called in favours from industry, including a Formula 1 racing team: ‘McLaren were designing different head tops and head fasteners because of their knowledge of helmets and they gave some really useful design insights. They were great guys to work with and they were sending emails at three o’clock in the morning. It was in the early stages of development and we really felt that we were having to develop something which was going to be needed imminently to stop people getting Coronavirus.’

The team went shopping for off-the-shelf parts — a fan, a filter and a battery — and within a week the prototype was built. Made with a fabric hood, and clear face visor, it had a High Efficiency Particulate Air (HEPA) filter linked to a battery-powered fan attached round the waist. With the entire face visible it made it easier to speak to patients and gave staff better protection than surgical and other masks. 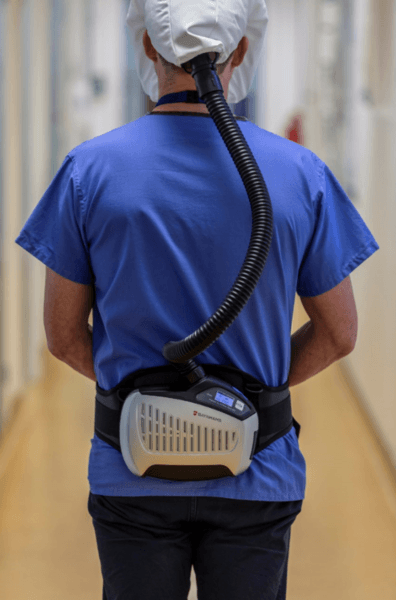 Paul Elkington’s links to Winchester start with his grandfather Monty Wright, who was Second Master, at that time not only the Headmaster’s deputy, but also in charge of College, from 1925 to 1952. His mother was born in Chamber Court and his son is currently a student in Beloe’s. He himself went on to study Medicine at Oxford and spent five years as a Junior Hospital Doctor during the days of the 72-hour week in London. On a year out in Zambia he discovered that while most of his patients had been diagnosed with HIV, it was TB that often killed them. From then on, studying TB became his life’s passion. He returned to Imperial College, London, to do a PhD, investigating how TB affects the lungs, eventually moving to Southampton University to set up the TB research group there.

His pedigree as a trusted academic clinician meant that when he and the team presented the newly named ‘PeRSo’ Respirator to hospital officials just ten days after they started the project, the hospital responded by asking them if they could manufacture it on a mass scale.

It was a huge challenge. Requests for government help fell on deaf ears, according to Professor Elkington: ‘We were trying to get hold of anyone to listen, and we got absolutely nowhere.’

Once again the team went local, drawing in INDO, a lighting company with contacts in China, and Kemp Sails, to invest in production. Within the first six weeks they produced 1,000 respirators. While they sought approval from NHS regulators to use the product, parts were shipped to the UK and by the end of the summer they were well prepared for the second peak.

The PeRSo respirator is now standard issue at Southampton and at 16 other NHS trusts. And at £225 each, lightweight and reusable, it is economically viable. What’s more, instead of patenting their design, the team put it out on the internet for anyone to copy — an altruistic move to help others deal with COVID. Professor Elkington explains: ‘We were all unanimous that we shouldn’t try to make money out of this.’ As a result, their plans have now been used to produce similar prototypes in Bangladesh, Colombia, Ethiopia and South Africa.

“'Instead of patenting their design, the team put it out on the internet for anyone to copy.'”

Professor Elkington and Hywel Morgan were awarded MBEs in the 2020 Queen’s Birthday Honours List for their work on the PeRSo respirator: ‘It was questioning the status quo in terms of what PPE provisions we could provide, and we were certainly fleet of action and of thought. It’s the culture of not taking things at face value, not just going down a straight railroad of thought and always looking at things from a slightly different angle.’

The roll-out of vaccines and warmer weather will diminish the COVID-19 threat, but Professor Elkington predicts it will not entirely die away: ‘I think there will still be some grumbling Coronavirus in the background, because some people won’t want the vaccines and the vaccines won’t work for some people.’

He is back working on his primary passion. In 2020 Coronavirus deaths superseded those from TB, but TB is a disease of poverty which kills 1.5m people worldwide every year, most aged between 20 and 40. Diseases that primarily affect the poorest can be difficult to get funding for. But having taken time out to aid the fight against COVID-19, Professor Elkington’s mission now is to reduce the terrible TB death toll.