Thanks to the generosity of the Friends of Winchester College and the purchase fund established by John Sparrow (1906-92), the Fellows’ Library has an exciting new acquisition: a colour-printed edition of John of Sacrobosco’s Sphaera Mundi (Venice, 1490).

The Sphaera Mundi of Sacrobosco, an English astronomer thought to be from Halifax in Yorkshire, explains the spherical geometry of astronomical movement. Originally written around 1230, the text was printed in numerous editions from 1472 onwards. It remained the standard introduction to astronomy until the late 16th century. 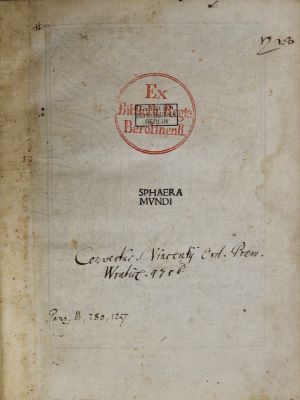 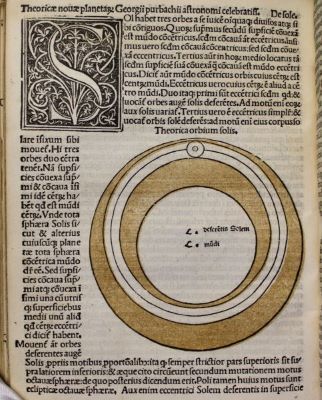 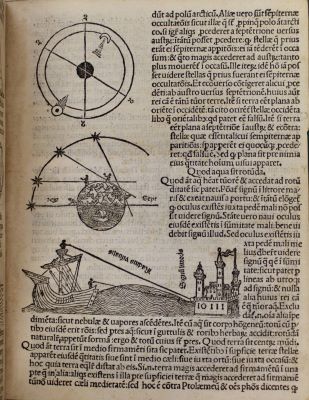 A manuscript note and stamps on the title page of our copy show that it was once owned by the Cathedral of St Vincent and St James in Wrocław, before entering the collection of the Staatsbibliothek in Berlin.

While Sacrobosco’s printed text remains faithful to the medieval original, in the late 15th century it began to circulate with new astronomical texts. This edition was published with Regiomontanus’s critique of Theoricae planetarum communis (a 13th-century university textbook), and the Theoricae novae planetarum (above, centre) of Georg von Peuerbach, who taught Regiomontanus. The images accompanying Sacrobosco’s text have varied greatly over time. Most serve to clarify the astronomical descriptions in the text and some were given more naturalistic detail, such as the waves of the sea (above, right). This particular image shows an optical experiment, which demonstrates that the world is round. 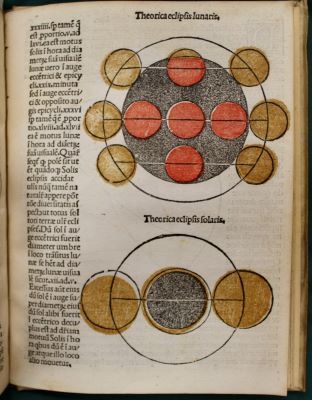 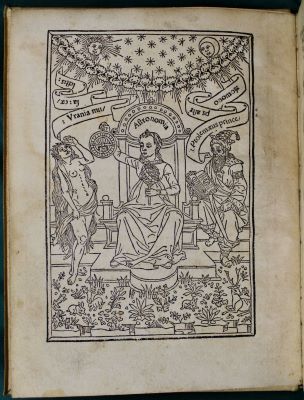 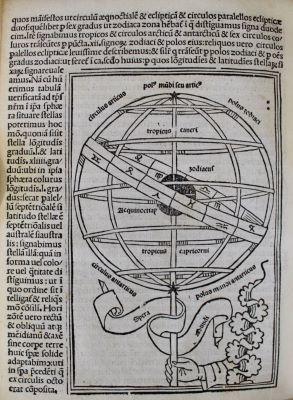 Particularly significant in this edition is the use of colour, which has been printed onto seven of the diagrams that illustrate Peuerbach’s text. The Sphaera Mundi was first published with colour-printed images in 1485 by Erhard Ratdolt, a German printer who is best known for producing the first texts of geometry and astronomy illustrated with printed diagrams, and the first books with illustrations in three colours. The College’s edition was printed in Venice (by Bonetus Locatellus for Octavius Scotus) shortly after, using many of the wooden blocks originally made for Ratdolt’s edition. The innovative use of colour is seen in the diagram (above, left), which shows the lunar and solar eclipses in yellow, red and black.

Some of the images in the book offer important insights into the use of scientific instruments in the Middle Ages and Renaissance. Facing the first page of Sacrobosco’s text (above, centre), Astronomia (the personification of astronomy) holds in her right hand an astrolabe: a tool that can be used to tell the time, determine the length of day and night, or simulate the movement of the heavenly bodies. In her left hand she holds an armillary sphere: a model of the universe that consists of a framework of concentric rings representing the movement of celestial bodies around the Earth.

The figures beside Astronomia are an acknowledgement of the ancient roots of scientific knowledge. To her right stands Urania, the Greek muse of astronomy. To her left is Ptolemy, the Greek astronomer who described the Earth as a sphere at the centre of the universe, and to whom Sacrobosco’s description of the universe is indebted. Ptolemy holds a book containing diagrams, much like those contained in the text that follows.

The addition of the Sphaera Mundi strengthens the tie between our medieval astronomical manuscripts and books related to the Scientific Revolution of the 16th and 17th centuries. It is on display in the Moberly Library throughout Common Time as part of an exhibition on the history of colour in printed books.

Thanks to two generous grants, the Fellows' Library has acquired a late 15th-century copy of the Shareh Mulakhas Al-Jaghmini fī al-Hay'a (Commentary on the Compendium of Cosmology): an Arabic textbook of medieval astronomy.