Earlier this year, in the process of cataloguing Winchester’s sculpture collection for the ArtUK website, we discovered that an early 19th-century wax profile of William of Wykeham, the College’s founder, had been given by the poet William Wordsworth as a gift to his nephews John and Christopher, who were pupils at Winchester. The central part of the inscription on the reverse of the frame is in the poet’s hand and reads ‘To the Wintonians / J + Christopher Wordsworth / from / their very affectionate Uncle / Wm Wordsworth / Rydal Mount / September 1822’. 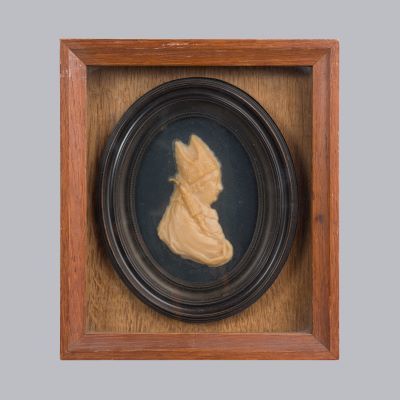 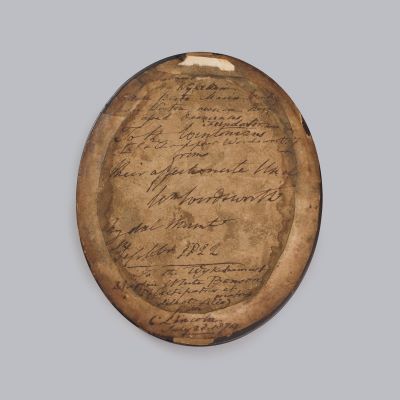 John and Christopher were the sons of William Wordsworth’s youngest brother, also Christopher, the Master of Trinity College, Cambridge. In the College Archives is a letter from Christopher to his sons at Winchester, which mentions a visit to his brother at Rydal Mount in September 1822. It must have been on this occasion that William gave Christopher the wax profile of Wykeham to take to his nephews.

Both boys had joined the school as Commoners (fee-paying pupils) in 1820, and both went on to study at their father’s college in Cambridge. John became a distinguished classical scholar before his early death in 1839. Christopher was Second Master at Winchester from 1836 until 1844, when he became Headmaster of Harrow. He then entered the church and was appointed Bishop of Lincoln in 1869, a post he held until his death in 1884. Christopher’s son and grandson were both Wykehamists.

The wax profile belonged to Christopher until 1874 when he gave it to another young Wykehamist, Martin White Benson (1860-1878), the son of Edward White Benson (1829-1896), Chancellor of Lincoln Cathedral and later Archbishop of Canterbury. Tragically, Benson died of tubercular meningitis at the age of seventeen. The wax must have been left among his possessions in College. Although it has been on display in Winchester’s historic library for many years, the remarkable history of this object has remained unknown until now, proof that there are still exciting discoveries to be made in the school’s collections.

A film about the Fellows' Library and some of the rare books and objects within this collection is available to view on the school's YouTube channel. The clip below highlights the Wordworth gift.

The online exhibition Wordsworth 250 celebrates the poet’s works, and his connections to the school. Currently on display at the school, in Moberly Library until December, it is also being hosted online to make it available to a wider audience.

Winchester's biannual speaker event, Studium, offers pupils the opportunity to hear from a host of experts in myriad fields, with the aim of broadening perspectives and horizons.