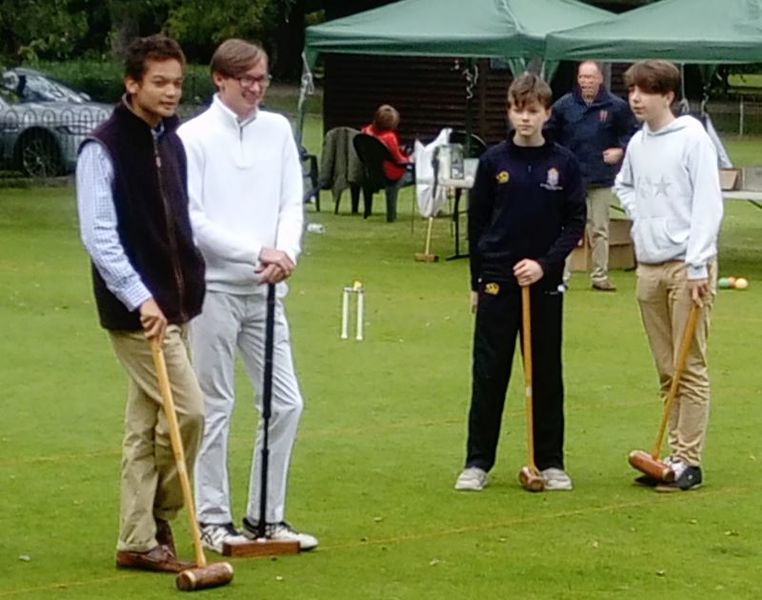 The team at the National Schools Finals

Croquet at the College

Croquet has been played at various times for over 60 years at Winchester. When I joined the staff in 2004 I set up croquet as a regular sport, giving regular coaching sessions, and arranging fixtures with several other schools. One of the highlights was coming second in the National Schools Finals in 2019, the last time they were held, when we were the highest-placed independent school.

Golf croquet is a variant of the game that is quicker to play than the full Association croquet game. It has become very popular, and is just as competitive.

Aston was a regular member of the Winchester College team before leaving last year. As well as his own astonishingly rapid progress as a player, aided by impeccable technique as well as temperament, he helped to inspire a group of players around him. Aston’s achievement in winning the British Open Golf Croquet Championship is truly remarkable. Aston has also been selected to represent England in the European Championships in August and we wish him every success.

In honour of Aston’s remarkable success, the school ran a Golf Croquet tournament on the last day of Cloister Time. 14 players took part in Warden’s Garden on a sunny Friday afternoon and the results were as follows: Winner: August Deeming (College), Runners-up: Will Hall (Kenny's), Konstantin Evdokimov (Trant's)