Amanda works with rhino conservation charities Care For Wild and Ol Pejeta Conservancy. Based in South Africa, Care for Wild is the largest orphan rhino sanctuary in the world, and their team rescues, rehabilitates and release rhinos, whilst protecting their habitat and supporting the local community. Steve Backshall, a previous visitor to Winchester College, also regularly supports their work. Ol Pejeta Conservancy in Kenya is the largest black rhino sanctuary in East Africa, and home to two of the world’s last remaining Northern white rhinos. Their reserve management plan also aims to support the people living around its borders, to ensure wildlife conservation goes hand in hand with education, infrastructure and healthcare. I myself visited in 2015 and was awe-struck by the dedication and determination of the rangers and conservationists.

Amanda’s talk began with hard hitting accounts of the brutality of rhino poaching, what motivates such actions and just how prevalent these incidents are. Poverty exacerbated by COVID-19 in particular has led to an enormous increase in orphan rhinos arriving at the sanctuary. Each orphan has its medical needs seen to, is introduced to the rest of the crash, fed every hour of every day, and released back into the wild when ready. Ask anyone in the audience, and they will be able to give you excellent facts about tracking rhinos in the wild. Did you know that when browsing, black rhinos nibble stems at a 45 degree angle? Do you know what to do if a rhino charges at you? (Run up a tree, and do so quickly as rhinos can run at 30mph).

An emphasis of the talk was that conservation cannot be effective if the local community is not deeply involved and also supported. An inclusive approach can provide jobs in conservation management, infrastructure maintenance and security for local people in areas that have previously been deeply impoverished. A recent community project is the CFW vegetable garden, which supplies organic vegetables to the sanctuary’s kitchen, which feeds 100 meals a day to staff and contractors. Not only does this reduce food miles and increase food security, but it encourages community participation with the sanctuary.

It was a privilege to hear from someone who is so experienced and passionate. I’m sure this enthusiasm has inspired the next generation of conservationists in Winchester and Havant. 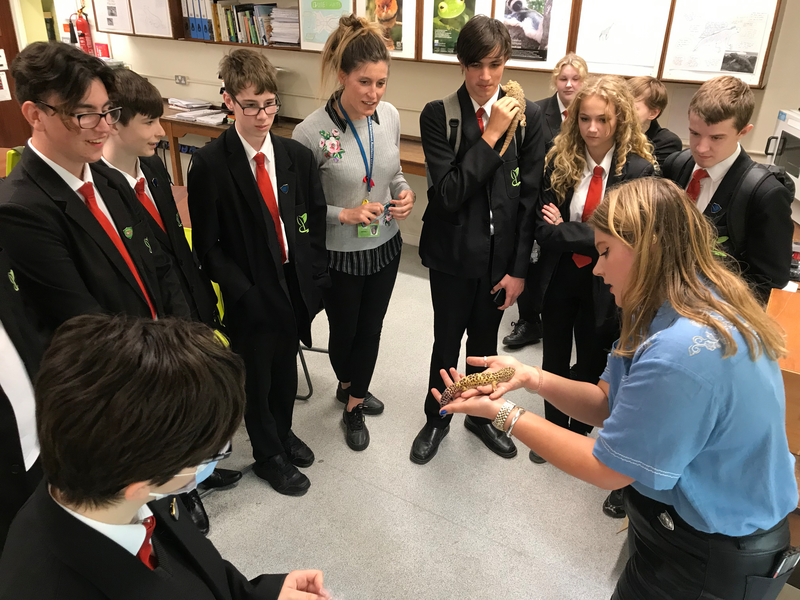 Park Community School students joined Eve for a natural history session, learning about the ecology of the animals in the Biology department.

Read more about Eve and Natural History at Winchester

Developing sustained, enriching partnerships with state secondary schools is a core part of the College's Vision for the 21st century.