When I meet Amy Bunce on an archaeological dig near Basingstoke, we have to shelter from torrential rain in a damp, open barn. She’s been hard at work all day and is dressed top to toe in very muddy fluorescent overalls. Despite the cold, she radiates excitement over what she has found beneath Winchester College.

Her involvement with the school began when she was asked to monitor what might lie beneath the old swimming pool and rifle range when demolition began earlier in 2020.

Winchester has a rich Roman, Saxon and mediaeval history, but she wasn’t expecting to find much because anything of archaeological interest was usually destroyed by the foundations when 1960s buildings were put up. Indeed, she was so pessimistic that she delegated the job to a junior member of her team.

On Day One of demolition though, she got a call from her colleague and travelled to the site the next day: ‘When I got there — I knew immediately. It was like goose pimples. I couldn’t believe what I was seeing. This was a once-in-a-lifetime find.’

“When I got there — I knew immediately. It was like goose pimples. I couldn’t believe what I was seeing. This was a once-in-a-lifetime find.”

Before her was a series of deep pits, and a dark organic streak of different silts which suggested it was once a road. She emailed a historian from her office and asked if there were any documents which could confirm this.

‘Receiving that email back from him on my phone while I was standing next to this long line of signs on the building site, it was: “Oh, my goodness, we’ve found a lost mediaeval lane”. When you get something like that, you have to cancel your life. Yes, seriously, you completely do.’ 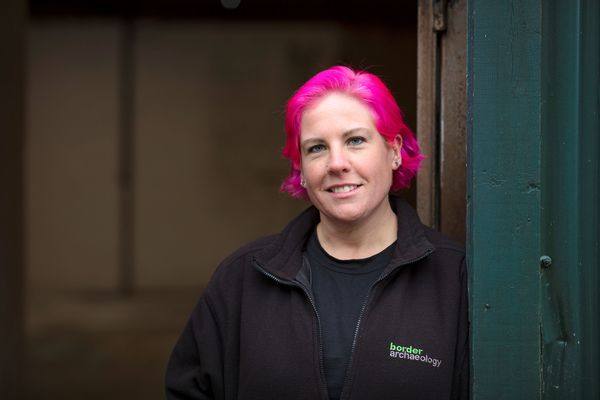 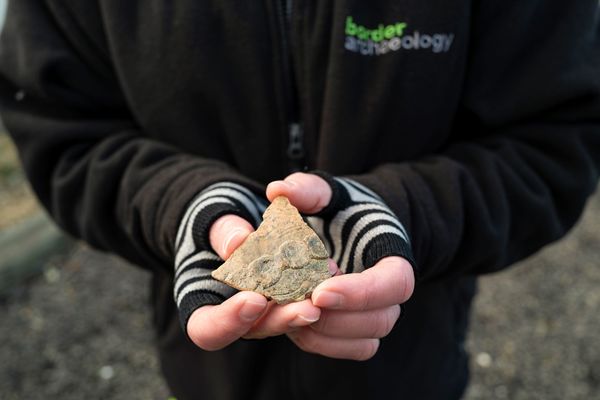 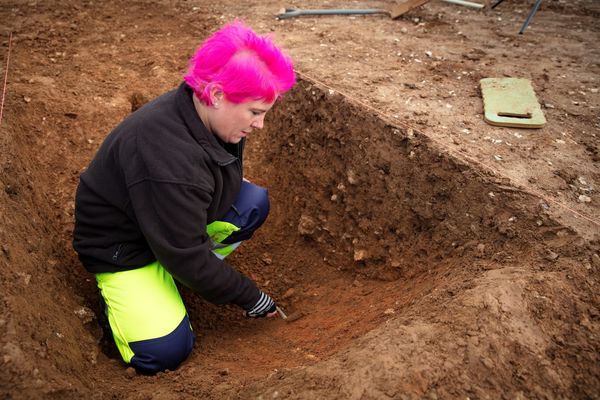 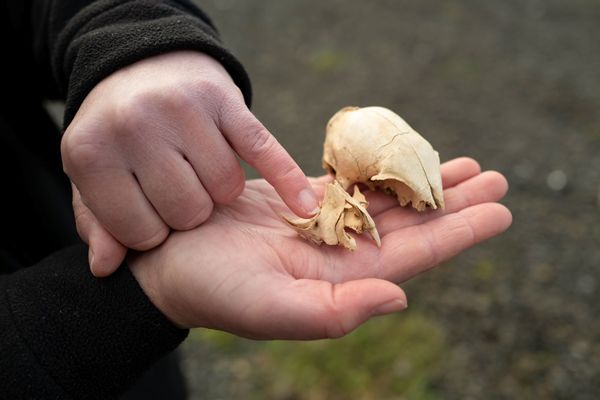 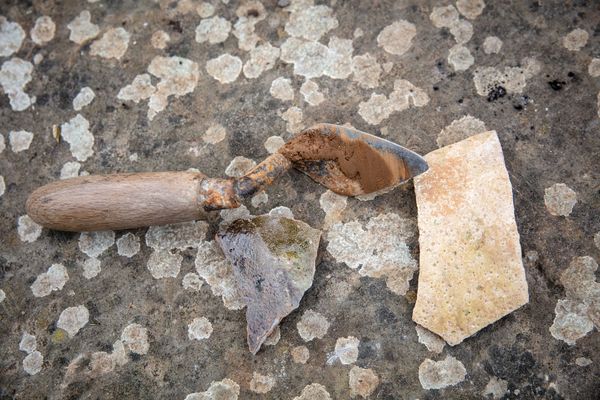 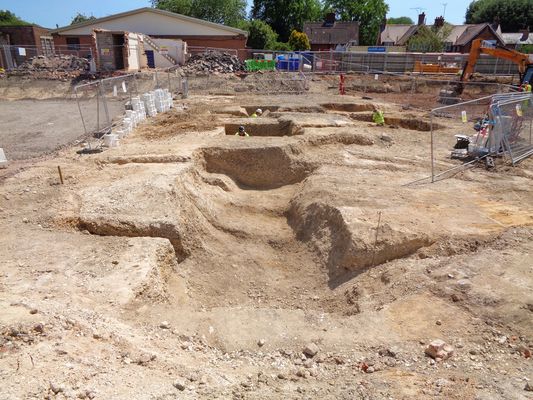 Building was stopped. Other owners might have been reluctant, but Winchester College understood the potential significance of the find.

‘Sometimes on a dig you might get a trace of lane, but this was tens of metres of lane that we were able to investigate. That hasn’t happened in archaeology since the 1970s when they did large-scale redevelopment. So to be able to study it with our modern scientific techniques was just such an opportunity. Mediaeval is good anyway, because it’s closer to us in time and easier to understand. To get mediaeval of this quality, where it should never have survived — this was fantastic.’

Amy, who is Director of Operations & Palaeoenvironmental Sciences at Border Archaeology, brought in a team of 16 archaeologists who began the painstaking job of digging by hand along the route of the lost lane.

What they found was a road made of angular flints. It had ruts worn into it by the wheels of hand and donkey carts which rolled over it centuries ago, and two deep drainage ditches on each side. Beyond it they found 13 refuse pits and a number of wells, one with a surround of white stone slabs intact. Dark-coloured soil at the edges showed where fires had been lit. Lighter layers showed how chalk had been washed down the ditches during rainstorms.

Over 16 weeks 5,000 items were removed and in a fascinating collaboration between archaeologists, scientists and historians they pieced together the story of their find. The scientists worked out that the items removed were 700 years old, from around 1320 AD. The historians found further written evidence of ‘Gynge Lane’ — ‘gynge’ then meaning ‘long’ — a lane which led straight into the walled city of Winchester. Two residents were recorded as living there, Ralph the Clerk to the Cathedral, and William of Exeter, a merchant.

‘Ralph the Clerk probably had a servant, and a large family because he could afford it,’ Amy explains. ‘We know from the rubbish he left that he probably kept chickens and pigs on his plot.’ Oyster shells and fish and animal bones revealed what they ate, and there were hundreds of pieces of broken pottery and ironwork, including an iron knife blade. 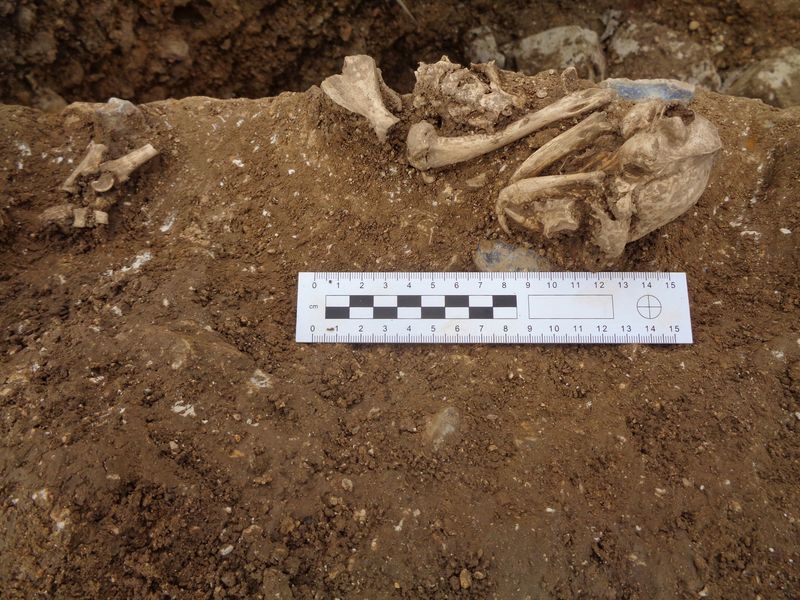 “Sometimes on a dig you might get a trace of lane, but this was tens of metres of lane that we were able to investigate. ”

The detective work continued with the discovery of the carcass of a large cat. It had lesions at the jawbone, proof it had been skinned, presumably to provide fur for clothes. But such revelations also raise unresolved questions. Why for example, Amy asks, did Ralph the Clerk live outside the city? ‘It’s strange, because you’re not supposed to have people that classy living outside the city walls.’

William of Wykeham was born in the 1320s. It wasn’t until around 60 years later, when he was already Bishop of Winchester and Chancellor of England, that in 1382 he founded Winchester College a mile up the road. The College was also outside the city walls and had strong fortifications. It also later bought the lane and surrounding land, which by the late 1300s, for reasons unknown, was no longer inhabited.

‘One of the things about the College,’ Amy says, ‘is that they talk about how defensive their first buildings were because they were just outside the city walls. So if they needed to build defences for a few boys in 1382, why did Ralph the Clerk have such a lovely life down here less than a mile away apparently without defences 60 years earlier? What changed?’

She is also fascinated by what some might see as a more mundane issue: ‘We didn’t find the house, which isn’t surprising as there were no foundations then, but we didn’t find any sanitation or cesspits either. Cesspits are very distinctive and make the soil go blue or grey. We found their domestic rubbish pits, but we didn’t find their latrines, which is slightly  disappointing, because you often find rings and jewellery that have been dropped in them by mistake.’

“One of the things about the College,’ Amy says, ‘is that they talk about how defensive their first buildings were because they were just outside the city walls. So if they needed to build defences for a few boys in 1382, why did Ralph the Clerk have such a lovely life down here less than a mile away apparently without defences 60 years earlier? What changed?” 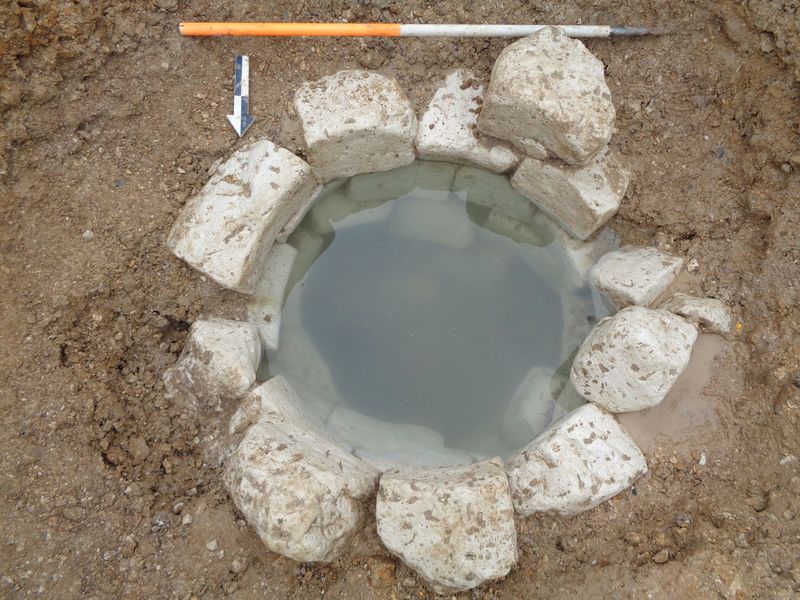 They may get their answer on their next project for the College. As work continues in the labs analysing the objects found under the Sports Centre, the archaeologists are watching a new demolition. It’s part of Mill, a classroom on the side of the Design and Technology building and situated at what may prove to be the very top of Gynge Lane. ‘Perhaps,’ she suggests, ‘that’s where the latrines are.’

Meanwhile the white stones from the well will go on display at the College with some of the artefacts, and Amy will publish a final report. COVID-19 meant self-distancing on site, and home-working for the lab scientists slowed work on the find. Nevertheless, it’s this discovery, not the pandemic, that has made 2020 an extraordinary year for Amy Bunce and her team.

‘How much of this stuff,’ she asks, ‘are we writing off? Sometimes planning permission will go through just because it’s underneath a 60’s building and they assume there’ll be nothing there. Well, this site proves that sometimes you can find really good archaeology. This theme of expecting the unexpected and questioning the unquestionable fits archaeology perfectly. No one expected to find Gynge Lane preserved underneath the swimming pool, and this forces us to reconsider how many other ‘lost lanes’ are not lost, but simply hidden beneath buildings which we assume will have destroyed them.’