It was planned as a memorial to Dr George Moberly, the recently retired headmaster, and paid for by donations given by OWs. Moberly retired in 1866 and the idea of a library bearing his name was first mooted at a meeting of OWs in Oxford in December 1866. The proposal was endorsed at a meeting of OWs in London in January 1867 and by April 1867, the Governing Body had agreed that William Butterfield would be appointed architect for the new library. He submitted his plans in May 1869 and was by then already working on the overall conversion of Commoners to the classrooms we have today. Work on the new library, located on the first floor of the north side of Flint Court, was completed in time for the formal opening on Domum Day, 27 July 1870. 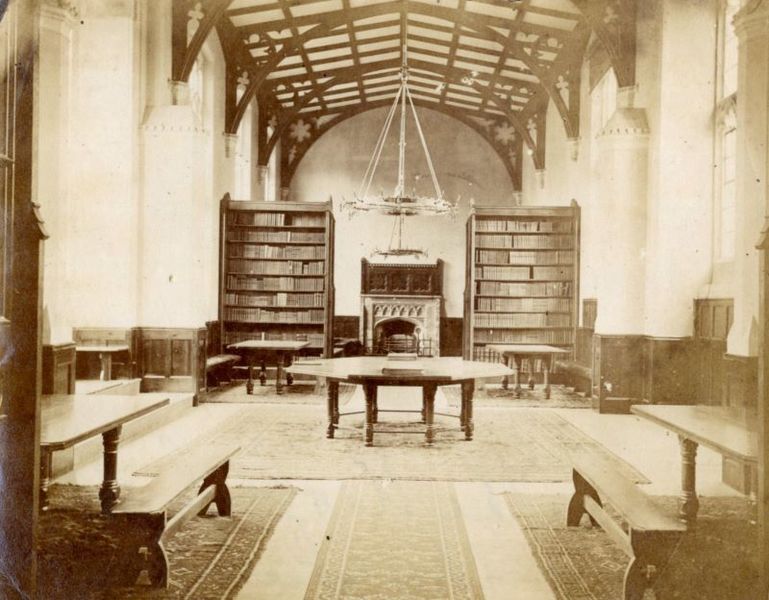 It took a little longer for the library to be furnished and filled. George Ridding, then headmaster, paid for the bookcases, desks, chairs and other fittings, and he bought £400 worth of books to fill the shelves. The library was finally ready to be used at Easter 1871. A donors' book was started to record all the new additions to the library. 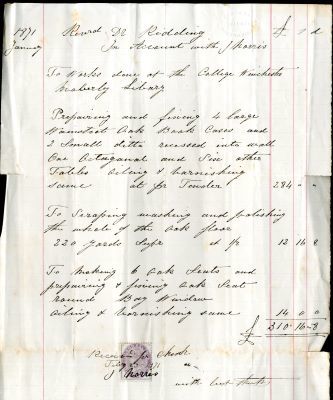 Bill for furnishings in the new library, 1871 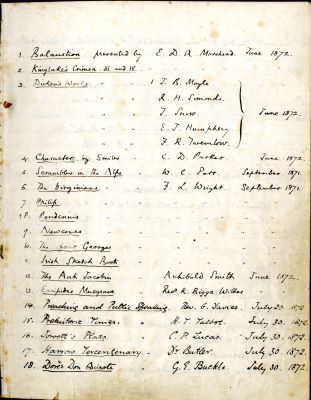 This new library was the first Winchester College library intended to be used by all the boys in the school. It set out to provide a variety of books for all to read and a proper place in which to read them. This sounds obvious but the first libraries available to the boys, created in the early 1830s, were only for prefects.

Moberly Library moved to its current location in the old Brewery in the early 1930s. Discussions started in 1926 as the old space was felt to be inadequate, little used and poorly maintained. Temporary improvements were made in the late 1920s but eventually the Headmaster, ATP Williams, and the Librarian, Walter Oakeshott, convinced the Governing Body of the need for a radical change. The old Brewery had been empty since 1904 and offered an ideal space. Plans were drawn up by Herbert Baker, architect of War Cloister. The eastern part of the building was open from floor to ceiling with display cases and comfortable seating; the western half was divided into two floors. Upstairs, as now, were the bulk of the books, and downstairs was the librarian’s office and an open stack of older books and runs of periodicals. An oak staircase joined the two levels, its position partly determined by the need to support the roof beams above, with a newel post carved to represent an owl sitting on a leather beer-jack, and a Latin inscription to reflect the old and new use of the building: MINERVAE CEDIT CERVISIA, that is, ‘Beer gives way to Minerva’. Minerva is the Goddess of learning and culture, often represented as an owl in Classical iconography.

The new library opened in Common Time 1934, the books having been moved across by a team of boys in December 1933. An article from The Wykehamist describes the scene: 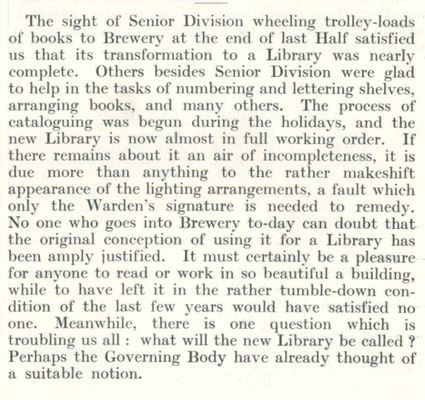 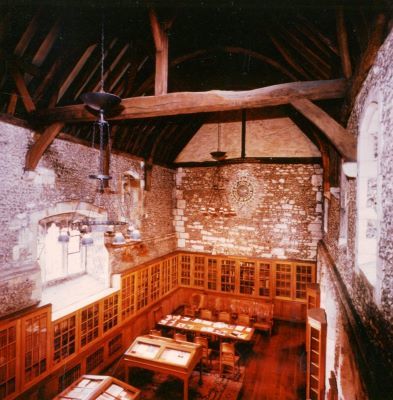 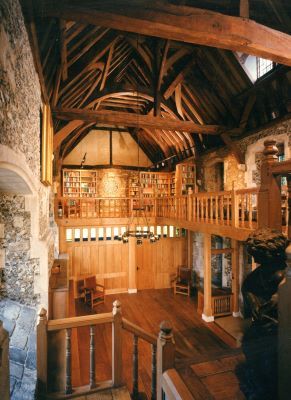 Moberly Library remained relatively untouched until the 1970s when the pressure on shelf space led to an expansion into rooms in the Headmaster’s House. As part of the 1973 Appeal, Lord Sherfield, Warden-elect, paid for the conversion of the former sitting room on the first floor. It became the Makins Room and was given in memory of a brother and uncle killed in WW1 and WW2. A link was created to the Brewery via a bridge over Parliament Gate and the new room then housed all the literature and reference sections, as well as becoming the principal reading room.

In the 1990s, further alterations were made. Viscount Eccles, OW and former Minister for the Arts, offered his collection of Private Press books. This was followed by a further offer of suitable furniture in which to house them. Then followed discussion as to where they should be housed. An imaginative solution led to the remodelling of the lower floor and east end of Moberly Library - the old Stack Room became the Eccles Room for Lord Eccles’ books and other rare books from the Fellows’ Library, and the upper floor was extended across the east end to provide more shelving in Moberly Library itself.

Another over-haul began in 2005 with the appointment of Hugh Eveleigh, an experienced Chartered Librarian. The library expanded into the Blackwell Room, older books which were retained, and all new stock, were re-classified and catalogued onto a computer software system, a library web page created, new seating and lighting introduced, the entrance shifted to Moberly Court and computers placed in the Makins Room to allow access to on-line databases and the electronic catalogue. In the twenty-first century the peripatetic library is securely located, up-to-date, and an essential element in the academic life of the school.

To mark the 250th anniversary of the poet's birth, Fellows' Librarian Richard Foster explains the importance of one of the school's latest acquisitions.

Science School has a diverse collection of fascinating objects, from an 18th-century microscope, fossils and taxidermy birds, to apparatus used to teach physics in the early 20th century. Twenty-four of the most interesting and unusual objects from the collection are now online.

Celebrating our history, buildings, people and collections, the school announces two new films and a podcast as part of this year's Heritage Open Days.