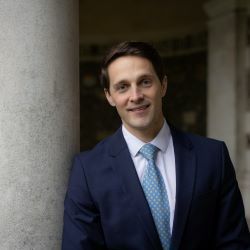 Aurélien is Housemaster of Moberly's. He moved to Winchester from his native France, where he studied English, Literature and Civilisation. He is now in his second decade of teaching languages at Winchester, most recently as Head of French.

He was Assistant Housemaster of Fearon’s for 9 years. What he finds particularly interesting in a boarding house are the exchanges with pupils, and he feels privileged to be part of such a diverse community. At Winchester, he has also been a football coach, personal trainer, Master in Charge of Strength and Conditioning, and involved in the Sports Scholarship programme.

Aurélien lives with his wife, Georgina, who is a language teacher and Head of Year 6 at The Pilgrims’ School. He enjoys sports, literature, film, music and travelling.