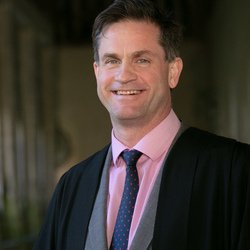 Ian Fraser joined Winchester College in 1990 as a Biology teacher, and became the College Housemaster (known as the Master-in-College) in 2012. He is responsible for the Election process: from the initial discussions with potential candidates about their suitability for Election, through to the final selection of the scholars.

Ian has a degree in Biological Sciences from Birmingham University and a PGCE from Cambridge. During his time at Winchester, Ian has been Head of Biology, Master in Charge of Swimming, an RAF officer in the Combined Cadet Force, and a set designer in the school’s theatre. He is a SCUBA Divemaster and remains Master in Charge of the Expedition Society, taking boys to remote parts of the globe.

From 1 September 2022, Dr Alex Latter will take over as Master-in-College. He can be emailed at athl@Wincoll.ac.uk.
Read more about Alex.