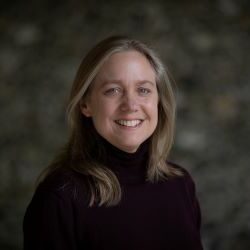 Conducting, organ performance and teaching have formed the backbone of Sarah Baldock’s career since leaving Cambridge, where she was Organ Scholar at Pembroke College, and immediately after graduating, Organist-in-Residence at Tonbridge School. Although her musical training focused on orchestral playing and chamber music as a Music Scholar in violin and piano at St Paul’s Girls’ School, an unusual opportunity emerged at the age of 23 when, despite not having had a chorister background, she was appointed founder Director of the Girls’ Choir at Winchester Cathedral. Sarah was later appointed Assistant Director of Music, accompanying the Winchester Cathedral boys and men in daily services, recordings, broadcasts and international tours.

Sarah proceeded to be Organist and Master of the Choristers at Chichester Cathedral during which time she directed two Southern Cathedrals Festivals, made a second solo organ CD and undertook several recordings and European tours with the Choir. As a conductor, Sarah has worked in New York, Kentucky, Norway and Sweden and continues to contribute to education projects. She is a former Trustee and regular course tutor for the Royal College of Organists. Collaborations with artist Sophie Hacker and composer David Owen Norris have brought an enriching dimension to her experience as a musician. Sarah performs internationally as an organ soloist, recently broadcasting with the BBC Singers and Concert Orchestra. She is the new director of the Winchester Music Club.

Sarah is a keen gardener and enjoys eating home-grown produce and being outdoors with her family.