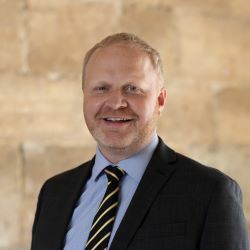 Iain Smith joined Winchester from Oundle School, where he was Deputy Head Academic for six years. He has previously held positions as Head of Science at Charterhouse and at Sherborne School, where he was also Head of Chemistry and a resident House Tutor. He is a Natural Sciences graduate from Pembroke College, Cambridge, where he was president of the college music society and a James Crowden Award Holder. He has been a consultant and principal examiner for Cambridge Assessment since 2008.

Iain is a keen musician; singing tenor and playing the bassoon in several external choirs and ensembles. He very much enjoys being in the outdoors as well: he is a white-water kayaking coach and, if not on the river, can often be found on a drier hillside, on the ski slope or in a cave. In the summer months, when the water is lower, he happily devotes his time to cricket: he is a qualified ECB umpire and, less impartially, has coached ‘A’ teams of all age groups.