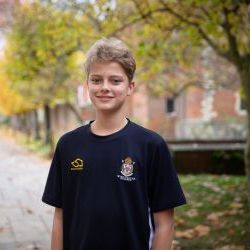 When I came on the first Sunday to Winchester, "apprehensive" would be a bit of an understatement. I was nervous of whether the people would be nice and the teachers welcoming. But it was also a return to a work environment after nearly four months of thinking about what happens in my favourite TV show, rather than the quickest way to form the comparative and superlative of 'small' in latin. So both excitement and fear were jumbled up together for me, " a JP man on his first day."

The first three weeks were full of introductions to the various sporting activities on offer. I was eager to try fives and rackets, as they were unfamiliar to me, and unique to public schools. I tried fives but it wasn't really for me. I had played some squash and tennis so rackets turned out to be a good fit. I enjoyed the fast paced induction and continue to play now.