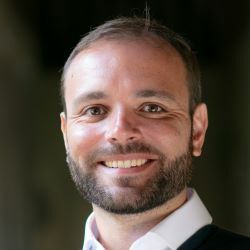 Dr Latter joined Winchester as the Head of English in September 2019 and became Master in College in 2022. He is responsible for the Election process, from initial discussions with potential candidates about their suitability for Election, through to the final selection of the scholars.

Alex has previously taught at Magdalen College School, Oxford, and the King’s School, Canterbury, where he was the Head of English and a Deputy Housemaster. He has degrees from the University of Cambridge and the University of London (where he also taught at Birkbeck College). His first monograph was published in 2015, and he continues to research and publish work on modernist poetry. In his spare time, he enjoys reading, travelling - particularly to Italy - and cooking.

He is married to Dr Eleanor Collins, herself a distinguished scholar, who is Acquisitions Editor for Literature at OUP. They have a young son, Harry.