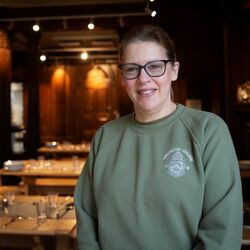 Having qualified as a nurse in London back in 1984, I spent most of my working career with older people. After moving to Hampshire, my family became heavily involved in the Air Cadet Organisation which led to our introduction to Winchester College. My husband and I volunteered with the CCF (RAF) section for a few years and have found the staff and boys so friendly and welcoming.

After making the decision to retire from the care sector back in 2020, I was keen to become more involved in College life and joined as a relief matron in Kenny’s, before becoming the matron in Kingsgate House (Beloe’s). Having brought up two boys, I understand the trials and tribulations they may face and my door will always be open to talk about any issues that may be worrying them as well as their hopes and aspirations for the future.