Thought for the Week: Why do epidemics end?

4th May 2020
BY Dr John Cullerne, Undermaster and Physics Don

The entry point into the mathematical problem of modelling an epidemic is to try to answer the question: Why do epidemics end? The fact that they do, I hope, is itself reassuring.

It might be a surprise that if we introduce an infection into a susceptible population, not all those susceptible seem to get it. A simple model involving the flow of water will help to visualise things. Imagine three reservoirs of water: the top, S, represents those susceptible to the disease and when they flow to I they are infected. Similarly, when those in I flow to R they have recovered. Let us also assume that recovered are immune. 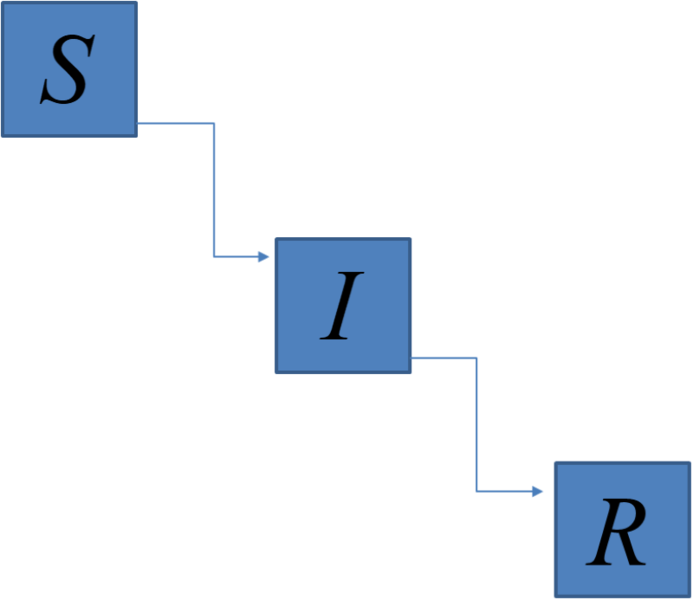 Prof. Patrick Valance often stresses how the peak in the UK cases is not a natural peak, but rather a supressed one: one brought about by the social distancing measures. The unprecedented national effort has kept the peak below the UK critical bed capacity. Remember, COVID-19 did not exist this time last year. Our infrastructure and systems were not geared towards dealing with a global pandemic, so what has been achieved is truly incredible.

Hindsight is a wonderful thing. Could the Containment Phase have been more aggressive? Yes, probably, but the amazing personnel in the NHS and other essential workers, the scientific community, and indeed all of us, have bought us some time. Testing, tracing all contacts, and isolating all potentially infected (Test, Trace, Isolate, or TTI) may well have stopped things getting to this stage earlier on in the epidemic, but were we in a position to be able to administer and implement such a scheme nationally? General Sir Nick Carter said that the Coronavirus has been the greatest logistical challenge in 40 years’ service. We will learn lessons. TTI will have to be the way we slowly emerge from the lockdown – essentially returning us to the Containment Phase, and human trials of a vaccine, to provide immunity safely, have started in Oxford. The scientific community is working flat out and we must all try to be hopeful and patient.