Thought for the Day: A Knight in Armour

A dragon roars as a knight on a white horse attacks with a lance. Meanwhile, an ice-cold princess seems in control of the situation, she has the dragon on a silken leash, unconcerned by the beast’s teeth and claws. In the background is a rocky cave, presumably the dragon’s lair, and a landscape that stretches far into the distance. Swirling dark clouds give dramatic action to the painting, sharpened by the converging diagonals of horse and dragon. 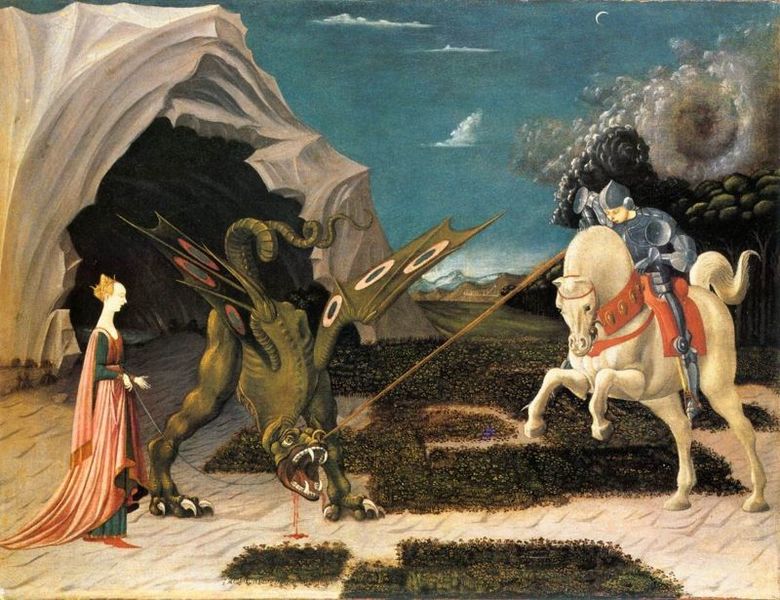 This small-scale painting, painted around 1470, is a gem of the National Gallery’s Early Renaissance collection. The story comes from the legend of St. George, as told in Jacobus de Voragine’s Lives of the Saints. In this 13th-century account, St. George, symbol of Christian virtue, killed a dragon, representing the Devil, and rescued a princess of the city of Silene, Libya.

Most of us pay little attention to art of the Early Renaissance, but move swiftly on to the Grand Men of Renaissance Art: Leonardo, Raphael and Michelangelo. And even those who love this period have to admit that St. George’s horse looks more like a rocking horse than a dragon-fighter, that the princess is so drained of blood she looks scarcely alive, and that St. George is far too young and beardless to take on anything so dangerously reptilian.

But this is the joy of the painting: it is fantastic and it makes us smile. Art historians tell us that the painting represents an important step in the development of Florentine single-point perspective; Renaissance costume historians that the princess’s dress shows us the bridal wear of the Florentine merchant elite of the 15th century. None of this matters much; it is a painting of the nursery that has delighted viewers for over five hundred years.

Right now, we all want a knight in armour to arrive and save the day, a syringe of coronavirus antidote in hand rather than a lance. We learned yesterday that over 40 clinics are working night and day to come up with a cure; let’s hope that one of them does, the shining knight of Uccello’s imagination brought fully up to date.

But while we wait, let’s look at things, and look at them with fresh eyes. Kenneth Clark, the school’s most famous art historian son, was always encouraging people to look at, not read about, works of art. During the war, as Director of the National Gallery, he allowed one painting each month to come back to London from Wales (where the collection was in storage). He thought that the benefit to public morale of enjoying something beautiful and civilising outweighed the risk of German bombs.

Right now, we cannot go to Florence, Paris, Athens or Rome; we cannot see their art galleries and magnificent collections. But we can enjoy them: with a computer and
Internet access, we can virtually experience the treasures of the world, without worrying too much about understanding them.

Congratulations to Bob Guan who, through his own research and analysis, has discovered a new species of woodlice, and won a prize for his work.

Winchester recently hosted the two-day final of an annual funding competition for LSE's aspiring entrepreneurs looking to build a socially-responsible business. In collaboration with Makyth Ventures, the event featured keynote presentations on leadership and venture building, and opportunities for Winchester pupils to speak, network and attend live funding pitches.

The Potential of the Extended Project Qualification