Two top-year Winchester boys are working together to develop an innovative chemistry-based model to simulate how epidemics spread.

Shern and Issac decided to join forces to develop a model using iodine and propanone, where iodine represents healthy people. They had previously investigated epidemics from two very different angles. Isaac had been looking at the biological nature of pathogens, while Shern had been studying the mathematics behind epidemic models.

After some advice from Head of Science, Dr Chas McCaw, the pair decided to see how the two chemicals reacted together in acidic conditions, with the acid representing infected people who could spread the disease. As Isaac explained: “The reaction forms an acid which, in turn, speeds up the reaction. This simulates an actual epidemic where, as more people get sick, the disease spreads even faster, leading to a domino effect.”

The pair are also investigating how adding titanium dioxide could slowly neutralise the acid and reverse the reaction midway. The neutralization of the acid simulates the death of the infected individuals. “This simulates most epidemics, where the number of sick people rise until a peak is reached, after which the number decreases,” noted Shern. “By modifying the amount of reactants that we add, we also hope to fit our model to multiple diseases and predict how an epidemic of that disease would play out in the real world,” added Isaac.

The school’s wider project on the behaviour of epidemics represents an intersection of maths, chemistry, biology, medicine and computing and represents our belief in the value of collaboration between Science, Technology, Engineering and Mathematics (STEM). 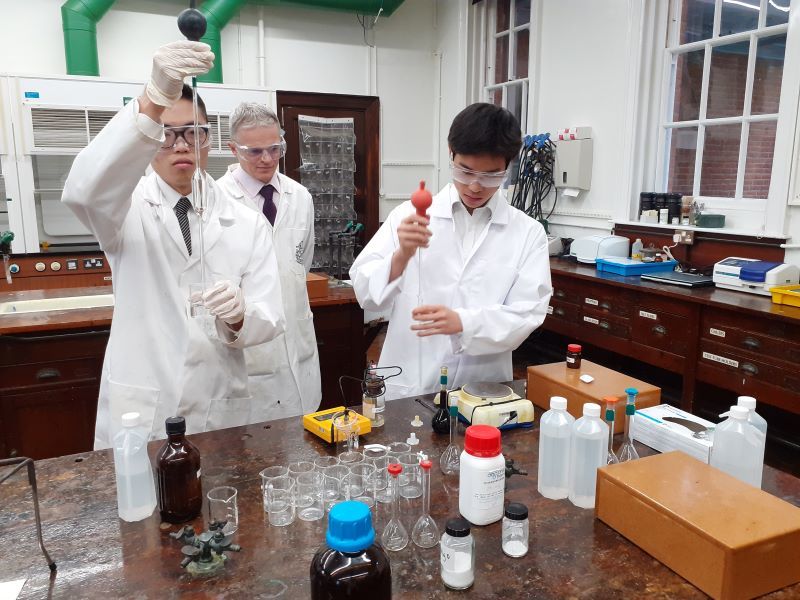 In our latest Thought for the Week, Dr Jamie Barron notes that the COVID-19 crisis has brought scientists into the spotlight, but that science by its nature sits uncomfortably with the world of the sound-bite.

This year, Winchester Maths Summer School will go ahead, virtually. 25 students from the maintained sector will enjoy maths challenges, get advice from current undergraduates, and prepare to study maths at university.

Thought for the Week: Why do epidemics end?

In this article, Dr Cullerne hopes to shed some light on terminology and concepts discussed at daily Downing Street briefings and in doing so explain in non-technical language where we appear to be in this epidemic.

On Earth Day, 22 April 2020, pupils were due to watch David Attenborough's latest film in an exclusive screening, thanks to the generosity of the Stewarts who continue to support the school's teaching of natural history, in honour of their son Duncan.

The challenge was to create an innovative and beautiful design for electric vehicle charge points.