The Geometry of Nature

Many of us this term have, in one way or another, been thinking about nature and the solace it can bring. A collection of works in the Fellows’ Library offers another perspective, from a 17th-century physician and Old Wykehamist who saw beauty in the geometrical aspects observed in nature.

Physician, natural historian, author, and collector, Sir Thomas Browne (1605–82) was a remarkable figure. His ideas survive to us in his texts, some of which will be displayed in Treasury during the Autumn. His inquisitive approach to the world was observed during his time at Winchester (1616–22), when he was often seen simpling—collecting herbs for medicinal purposes—in the fields around the College.

Browne’s fascination with the natural world is explored in one his later texts, The Garden of Cyrus (1658), in which he explores the underlying geometry of nature. In it, he surveys many organisms, observing correspondences between their patterns, shapes and symmetry. From this, Browne identified a recurring pattern that he called the quincunx: an X shape made by five points, illustrated at the beginning of the book. Browne observed its re-occurrence in a variety of natural forms, from the ‘protuberances in Pineapples’, the ‘wings of Flyes’, and the arms of ‘Sea-starres’ (starfish). In short, he saw the quincunx everywhere. 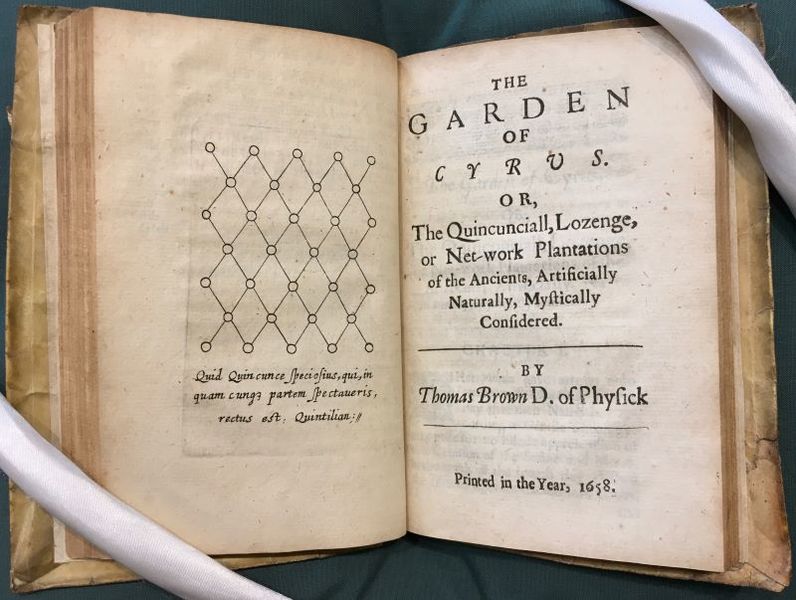 The Quincunx in the Stars

This might seem farfetched to us, but the idea of the quincunx existed in scientific works previous to Browne. The astronomer Johannes Kepler (1571–1630) considered the significance of the number five in relation to the angles between the stars. For Browne and Kepler, to identify these patterns was to better comprehend the order of the universe. Browne clearly recognised the beauty in this, writing in his first publication, Religio Medici (1643), ‘Art is the perfection of nature’.

For Browne, his house and garden were a laboratory for understanding the medicinal properties of plants, as well as places of contemplation and inspiration. Whether more comfortable in the realms of the arts or sciences, we can all take a leaf out of Browne’s book in the ways we look at the seemingly mundane details in the world around us: observe closely, curiously question, and marvel at their elegance.

Thomas Browne will be the subject of our next exhibition in Treasury, curated by a group of senior students.

As part of its extensive collections, the school has around 500 watercolours and drawings from the 18th to 20th centuries, which have now been digitised to make them accessible to as wide an audience as possible.