About Suffering They Were Never Wrong

In his poem, Musee des Beaux Arts, Auden is writing in response to Bruegel’s painting Landscape with the fall of Icarus (banner image). Bruegel’s portrayal of Icarus is markedly different from other, more dramatic renditions of his fall. Auden reflects that difference in his poem, for the ploughman ‘it was not an important failure, the sun shone’; ‘the expensive delicate ship…. sailed calmly on’.

About suffering they were never wrong,
The old Masters: how well they understood
Its human position: how it takes place
While someone else is eating or opening a window or just walking dully along;
How, when the aged are reverently, passionately waiting
For the miraculous birth, there always must be
Children who did not specially want it to happen, skating
On a pond at the edge of the wood:
They never forgot
That even the dreadful martyrdom must run its course
Anyhow, in a corner, some untidy spot
Where the dogs go on with their doggy life, and the torturer's horse
Scratches its innocent behind on a tree.

In Breughel's Icarus, for instance: how everything turns away
Quite leisurely from the disaster; the ploughman may
Have heard the splash, the forsaken cry,
But for him it was not an important failure; the sun shone
(As it had to) on the white legs disappearing into the green
Water, and the expensive delicate ship that must have seen
Something amazing, a boy falling out of the sky,
Had somewhere to get to, and sailed calmly on.

The Census at Bethlehem, also in the Musee des Beaux Arts, is more typical of Bruegel’s artistic style. In his poem, Auden alludes to this painting too, referring to ‘miraculous birth’ and children ‘skating on a pond’. Despite the snow on the ground and the prominent architectural style of the Low Countries, we can make out Joseph leading Mary on a donkey, presumably towards the manger behind the inn. 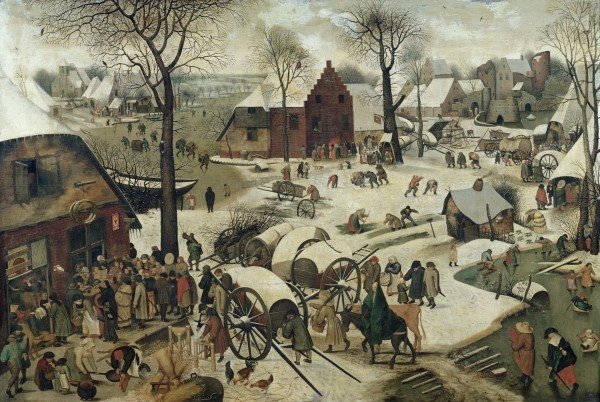 The Census at Bethlehem by Pieter Bruegel the Elder

‘About suffering they were never wrong, the old Masters’: this is also true in literature. Most of Hemingway’s For Whom The Bell Tolls is simply setting the scene for the final few dramatic pages. Vassily Grossman’s Stalingrad focuses mostly on ordinary people ‘walking dully along’.

When reporting on war, the media inevitably highlights the most dramatic events, so it can seem surprising that for the majority of people life goes on largely as normal. Movies that portray World War II present a succession of action-packed moments, yet my parents and grandparents reflected that for most of the time and for most of the people very little happened at all. My mother was more inclined to remark on the positives of the war years: an increased sense of community, the appreciation of simple pleasures, the enjoyment of a walk in the sun the sweet sorrow of parting eclipsed by the joy of reunion, . Even those at the front line suffered interminable boredom, broken only from time to time by unimaginable horror.

Today, we too find ourselves in a momentous moment with the advent of the coronavirus. As we sit in our respective homes, drawn in on ourselves, waiting, let’s hope that when we look back on it all we can reflect that for us very little that was noteworthy ever happened.