As part of our House from Home series, celebrating what makes each of the houses special, Du Boulay's boys and staff created a video describing what they are missing about their house, whilst learning remotely through lockdown. Find out more. 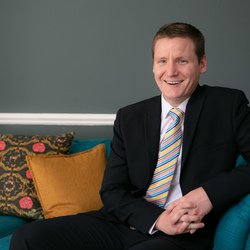 Dr Andrew Savory became Housemaster of Du Boulay’s in 2018 having previously led as Head of Biology for six years. Formerly a researcher at Oxford University’s Institute for Radiation Oncology he published several papers on DNA repair in unicellular organisms. He now prepares many of the school’s prospective medics. Andrew is also a Flying Officer in the Combined Cadet Force RAF section.

Married to Hannah, a Maths teacher at St Swithun's School, they have two young children. Andrew enjoys running, science fiction and board games.